Get To Know Your Town By Biking It

When I was a full-time reporter and moving around the country for newspaper jobs, the first thing I did when I got into a new town would be to break out my bicycle and troll the new city by bike.

It was a beautiful away to connect to my new hometown. I'd bike down to main street, and slowly pedal up and down the side streets, then set off on roads that led to neoghborhoood to neighborhood, and even the commercial strips.

There was no better vehicle to use to explore my new city. I could slowly soak up so much yet the bicycle would allow me to cover so much ground.

Even here in Tampa, where I have lived for the past six years, a 20-mile bike ride around this place always shows me a side of Tampa.

I was cycling on Swann Avenue heading toward Howard Avenue near the Panera Bread intersection in south Tampa when a yuppie south Tampa guy in a BMW buzzes me and passes me by less than a foot of space. He is texting and playing with his electronic gadget while driving and passing me way too close and in violation of the three-foot buffer law.

He was in the left-turn lane on Swann ready to turn onto Armenia when I pulled up on Swann on the far right side of the road. His passenger-side window rolls down and I figure he might apologize for nearly hitting me. But this is Tampa, where drivers believe they own the road and a bicyclist is guilty, I guess, for just being there.

He shouts that I should be biking on Bayshore or the sidewalk and that it's dangerous to bike in traffic. I explain to yuppie south Tampa BMW man that he's the one who is dangerous when driving and texting at the same time and that, as a bicyclist, I am part of the "traffic."

And here's my other slice of Tampa. I saw this guy at Boulevard and Kennedy about 10 minutes later. 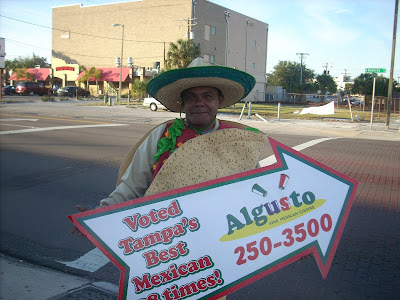 That's one juicy taco, my friends. Look at that filling! 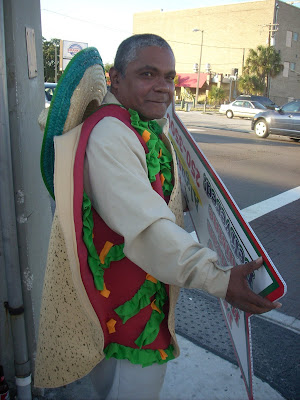 Like I said, get a good taste of a town by biking around it.
Posted by Alan at 3:18 PM

Algusto's is seriously the best restaurant I've eaten at in Tampa. There might be a few places where I've had a better experience but the sticker stock on the final bill taints those memories. Algusto's is simply an incredible bargain. It's not cheap but the plates are big enough to split between two people and if you add an appetizer to that you'll probably be stuffed for less cash than most big chain restaurants where the service won't even compare. Seriously try it, support local businesses, they're almost always better than chains.