Bicycle Stories Publishes Comment That Was Removed by TBO.com 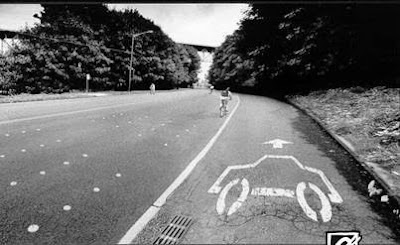 Several months ago I posted this photo and sentiment on Facebook and I'm pulling it out for posting on Bicycle Stories in light of a story about a bicyclist who was given a citation by police for being in the road in Tampa.

This sentiment was also posted as a comment on this week's TBO.com story about bicyclist Brad Mercel who was cited by Tampa Police for impeding cars, but TBO removed the comment.

So, here is the comment that was removed by TBO.com:

"Do you like paved roads? Thank bicyclists. We're the ones who got this country to pave roads in the 1800s: 'The League of American Wheelmen founded Good Roads Magazine in 1892 to promote the need for public roads.' Now, I'd like a liitle piece of that road so I can drive my bicycle."
Posted by Alan at 10:58 AM

Any idea why that comment was removed? No cursewords or slander that I can see...I wonder if TBO is overseen by the automotive lobby?

It was probably deleted becasue its untrue-the first paved roads in this country were in 1872 in DC and in NYC.

There's nothing in that statement that is untrue -- it DOES say "1800s". Last I checked, 1872 was in the 1800s. The LAW was founded for just that purpose, and cyclists were instrumental in getting roads paved...I think the original commenter meant "paved" roads, anyway, rather than "public".

Anyhow, considering the drivel that TBO DOES allow to be published in the comments (veiled racism, blatant xenophobic attitudes, etc.), deleting this one makes little sense.

The comment was: "Do you like paved roads? Thank bicyclists. We're the ones who got this country to pave roads in the 1800s: 'The League of American Wheelmen founded Good Roads Magazine in 1892 to promote the need for public roads.'

The commentor's premise is that cyclists "got this country to pave roads" as id these were the first paved roads in the country.

Its untrue. Cyclists had nothing to do with the first paved roads in America.