Saul-Sena Goes To Bat For Bicyclists In Tampa

In St. Petersburg, Mayor Rick Baker took a city that was among the worst for bicyclists in the country and turned it around. A worst-to-first success story, St. Petersburg is recognized annually by the League of American Bicyclists.

In Tampa, Mayor Pam Iorio has given lip service and done very little to help bicyclists. As a result, Tampa is a city where roads are designed for drivers, some police officers don't know the bike laws and many bicyclists don't feel comfortable on roads where drivers think they own the streets.

Iorio is no friend to bicyclists. But Tampa has a political advocate for bicyclists. She's Councilwoman Linda Saul-Sena, who SWFBUD recognized with a SWFBUDdy Award during the Oct. 11 Bicycle Bash. (Baker also received a SWFBUDdy). 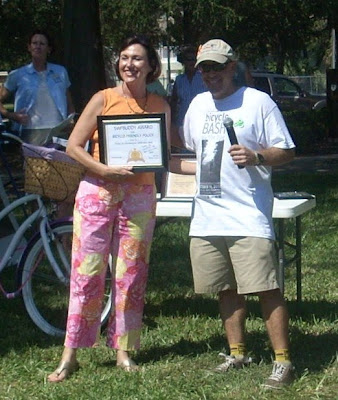 I sent a potential funding source for city bicycle needs to Tampa city staff, but never heard back from the Tampa city employees.

Saul-Sena picked up the ball and contacted Iorio and several other city staffers in an email and asked to meet them in early January to discuss this potential funding source.

Saul-Sena also recently appeared before the Selmon Expressway Board at a hearing about highway improvements and asked that an urban greenway be incorporated into the project. Nico Stearley and Anna Vasquez, architects at HOK who are volunteering to design the Urban Greenway, praised Saul-Sena for her support: "We were gracious to hear Councilwoman Saul-Sena publicly share her support for the Urban Greenway’s integration into the project whether or not the TIGER grant is awarded."

Saul-Sena also questioned why bike lanes were no being striped in Cass and Tyler in downtown Tampa as part of a utility-repaving project when both Cass and Tyler are on the city's master plan for bike lanes. She contacted city staff on that one.

Eventually, I did get an email from an employee explaining bike lanes are not part of the project because, in part, "Economic conditions make it very challenging for the City to undertake any 'non-essential' projects at this time."

Bike lanes as non-essential? That's city of Tampa for you. I'm glad Saul-Sena is representing our interests and we have a voice in Linda at city hall.

Linda, who considered running for Tampa mayor in 2011, has decided to run for a countywide commissioner seat and will face current Commissioner Ken Hagan in a county commission race in 2010.

If you are a bicyclist in Hillsborough County, I hope you will back Linda's run for county commissioner in 2010.