Before the public hearing tonight I chatted with Don Skelton. Name ring a bell? It should. He's the top dog for the state Department of Transportation district that covers the Tampa Bay area. Did you know Don biked to a job in Daytona Beach from south Daytona when he was a teen-ager.

And he said he might actually have to bike to a mass transit station one day because his teen-age son might have to use his car.

What Don was telling me between the lines is that he appreciates bicycling.

That's good news to know. We need Don -- as the DOT district secretary and DOT chief for our area-- to have his staff mix bike lanes into road projects and make sure his state road designers consider the needs of bicyclists.

I actually first met Don tonight just outside his DOT district office off McKinley Drive south of the USF campus because he was walking across the street to a public hearing being held by the TBARTA agency -- the regional authority charged with creating a mass transit system for the Tampa Bay region.

I was the guy in the car. How was strange was that? I'm the bicycle guy and I'm in a car offering a ride to the DOT chief, who declines my car ride offer and wants to walk to the TBARTA meeting.

It was attending a TBARTA hearing for people to pipe in comments about TBARTA's master plan -- the big-picture, bird's-eye view of its proposed mass transportation plan. Here's a pic of the public hearing. 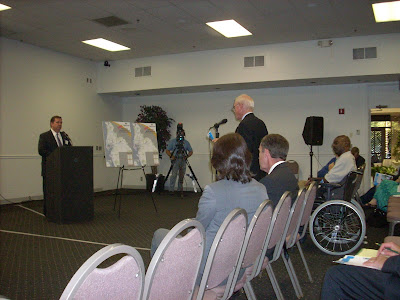 I attended to make sure TBARTA would include bicycling in all phases of the plan. I spoke for the record and requested TBARTA include bike racks and lockers at all mass transit bus and light-rail stations; provide access on the light-rail trains and buses for bikes and include photos of bicycles and bicyclists in all of its promotional brochures, web sites and posters.

It was disappointing not to see bicycling mentioned and shown in the master plan photos -- no bikes shown at stations, no bikes on buses or light rail, no bike racks or facilities.

How do they expect people to get to the stations? Or go from buses or light rail to their jobs? There will be park-and-drive lots, obviously, at the suburban stations for cars. But bicycles are a vital link in any mass transit system and MUST be included in any TBARTA plan.

After I made my comments at the hearing, I met this guy. Recognize him? You might know this guy more as the former middle linebacker for the Tampa Bay Bucs than as the chairman of the TBARTA board.

Shelton Quarles wanted to let me know that bicycling will be part of any TBARTA plan. Shelton said he's bicyclist, too, and he rides in the north Carrollwood area before dawn. Make sure you have a light on your wheels, Shelton. 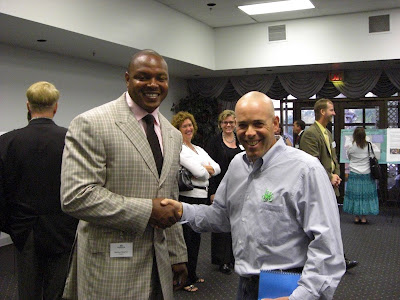 Shelton gets his bicycle at Carrollwood Bicycle Emporium, a SWFBUD member store and likes to work with CBE store manager Manny Sierra.

Shelton wanted to get a photo and made sure my green bicycle pin was easily seen in the photo.

Then I spoke with Scott Collister, director of transportation development for the Tampa Bay DOT district, also known as District 7. I explained to Scott that SWFBUD is not looking for bicyclists to take over the road. We want to share the road with drivers and I asked Scott to see if the local DOT office could start a public awareness campaign to get drivers to understand they need to share the road with bicyclists.

Scott said he would look into it.
Posted by Alan at 5:58 PM